You are here: HomenextChapelsnextHerefordshirenextSteens Bridge 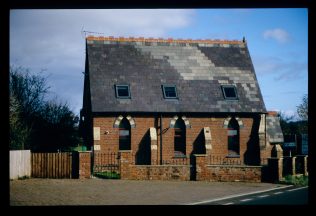 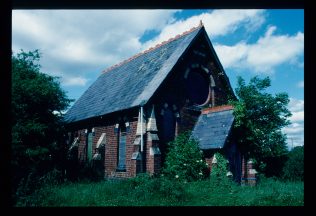 A Methodist Chapel marked on the 1889 and 1964 OS maps. It is situated adjacent to the A44 Leominster to Bromyard road. It is brick built with a slate roof and ornamental ridge tiles. The brickwork of the chapel is ornate in that it is in colours of red, yellow and blue/black, and these colours have been used to create patterns around the windows and the four wall buttresses on each side of the structure.

The front has a large porch with a slate roof, and above the porch is a large circular window with some coloured glass. On each side of the porch are narrow lancet windows. The gable end has decorative barge boards but there is no inscription on the outside of the chapel.

The conveyance of land for the building of Steens Bridge chapel is dated as 4th May 1881, and the chapel received its certificate of worship on the 13th September 1881 as a Wesleyan Methodist Chapel. The land had been given by a Mr. G. Lloyd who was a local preacher and member of the Methodist Society.

There are no figures for membership of this chapel before 1944, when there were four members, and in 1960 the number was the same. In 1929 there was a Sunday evening service and by 1931, as well as the evening service, there was also a Thursday evening meeting once a month. In 1930 the Leominster Free Church Magazine reported that the chapel had re-opened (this may have been after renovations) and that the congregations were encouraging. In October 1967 the chapel was closed and the building later sold for £250. The chapel has remained in private ownership since and has now been converted into a dwelling.