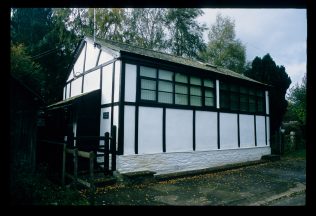 A Methodist Chapel shown on the 1st Edition and 1964 OS maps. On the 1842 Tithe Map the field is labelled chapel and is under the ownership of the Wesleyan Methodists, who are the trustees of Thomas Copner. The field behind the chapel is labelled as Meeting House Field and is owned by Thomas Copner. The building is on the left hand side as you go through the hamlet of Marston from Pembridge and is now in private ownership.

There were Methodists in this area in the early 19th century, and by 1835 there were seven members in Marston. By 1860 there was a chapel in Marston (built 1836?) which was one of seven in the Kington Circuit. The chapel that stands today is a later version, which was built in 1891 by the Wesleyan Methodists, seating 100. By 1949 the numbers had dropped to just two members at Marston, and these were soon transferred to Pembridge.

There was no Sunday School at Marston, and the children had to walk to Pembridge to attend the Sunday School there. In 1967 it was agreed that Marston chapel should be put up for sale.