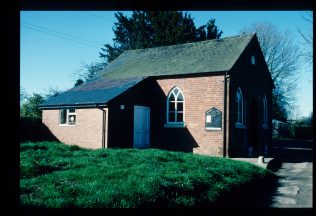 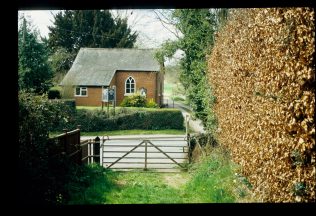 The chapel is located in the middle of the village of Luston in the north of the county. Unusually, the parish church is one mile from the centre of the village.

In the 1860s the land for the construction of the chapel was donated and the chapel built using money raised through public subscriptions. Twenty years later a strip of ground was purchased to enable access to the side windows and a small fuel storage shed was built.

In the 1950s the pulpit was replaced with one from the disused chapel at Stockmoor near Dilwyn.
The chapel had its own Sunday School, and the registers show that for the years between 1899-1910 and 1928-1964 attendance would vary between 40 down to two.

The date-tablet above the door of this chapel reads “Wesleyan Chapel 1862”. Seating for 60.

In 1962 the chapel celebrated its Centenary Service. A letter commemorating that service mentioned that numbers at the chapel had not always been good and on several occasions the chapel had been threatened with closure. The numbers in attendance continued to fall and in 1967 the Border Counties Commission Experiment decided to stop Sunday service at Luston.

However, due to the hard work of the community, Luston Chapel recommenced services in 1974 on the first Sunday of each month, and in April 1982 this was increased to two Sundays a month, with numbers attending varying between 10 and 20