You are here: HomenextChapelsnextHerefordshirenextHarp Yard, Kington 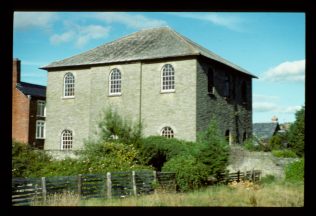 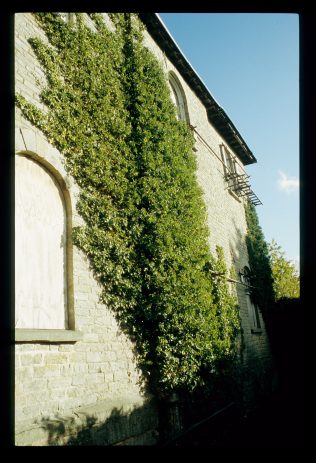 A former Wesleyan Chapel in Harp Yard. It is a square, stone building with a hipped corrugated iron roof. The building consists of two storeys and a cellar. At the front of the building are two (formerly three) round-headed windows. The doorway has an open pediment and the doors open down the centre.

It is thought that Harp Yard was the site at which John Wesley, the great Methodist leader, preached when he visited Kington in August 1746. In 1801 Edmund Cheese Esq., who lived at Ridgebourne, gave a small house adjoining Harp Yard to be converted into a chapel. The conversion cost £70 and the chapel was opened on 1st November 1801.

Later on the chapel was inspected and the walls were found to be unsafe and beyond repair, so a new chapel was built adjoining the site. It opened on 13th November 1829 (this is the chapel that survives today). However, the general feeling about this new chapel was that it was unsuitable in position and appearance to be the centre for a thriving Methodist Circuit.

When the chapel was opened the Kington Circuit consisted of 20 societies with a total of 400 members; by 1835 this number had increased to over 500. In 1896 a new Manse was built in Mill Street. The old chapel in Harp Yard was sold and was later used as a seed mill and warehouse.