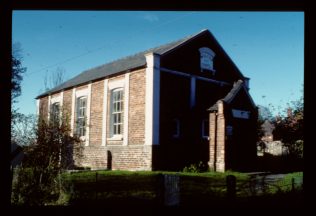 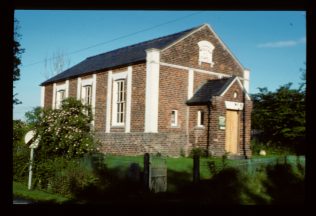 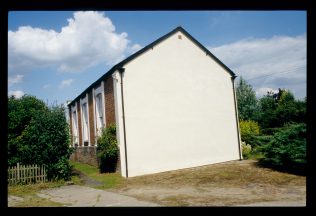 The chapel is situated halfway along North Road, just off the centre of the village of Kingsland. The chapel was set up in 1857 when the number of Protestant Dissenters in the area was enough to merit a place of worship of their own. They were known as Wesleyan Methodists. The building is on a raised plot with Chapel Lane on one side and houses on the other and seated 100.

There are few early records of the life of the chapel. In 1924 a record of Sunday School attendance shows that about 20 children were regular attendees and the Superintendent was Mr. J. Preece. Mr. Preece was followed by Mr. Saxon and Mr. W.L. Roberts in 1940. Mr. Roberts and his family lived in the Chapel Cottage next door, which has since been demolished.

In 1957 the chapel celebrated its 100th birthday, and an event was organised by Mr. F.S. Goodman, Mr. R. Powell and Mrs. E. Rhodes. The guest speaker was Reverend W. Russell Shearer. The celebrations also included a United Rally in the nearby Coronation Hall, which was opened by the Circuit Minister, the Reverend R.W. Dale, and the speaker was the Reverend Brian O’Gorman.

Another preacher connected with Kingsland was Mr. E. Passey. He came on to Full Plan in 1900 and reached his 100th birthday on 20th July 1974. He served 70 years as a local preacher, which is believed to be a record in Methodism. He died at the age of 101.

In the 1970s the chapel was closed, but services continued to be held in private homes and plans were made to remodel and refurbish the chapel, which was re-opened for services in the summer of 1982.