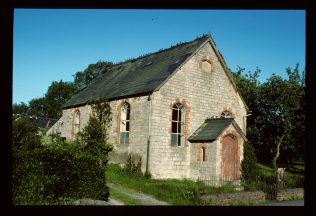 The building has a slate roof and an enclosed stone porch with a small window on either side. On each side wall there are two windows. There is also a galvanised iron shed adjoining the main structure. At the front of the building is a low stone wall topped with iron railings.

The building was once a Wesleyan Methodist Chapel. It was built in 1864 at a cost of £218 on land under the ownership of John Harding of Leamington. The trustees were:

In 1908 6ft of land adjacent to the chapel was rented from the nearby Lynch Estate to put up stables for those who had come a long distance to attend. The rent was 6d a year. The chapel was registered for marriages in 1907 and had seating for 120.

In 1931 there were services at 3pm on Sundays and at 7pm on Tuesdays. The attendance at Eardisland was variable. G.L. Harriman in his book Pastor at Pembridge described Eardisland as “a delightful spot scenically but a disaster area Methodistically”. He later when on to say that if he visited the village before a service he might be able to double the usual numbers but they soon fell again.

Eardisland Chapel appears on the Methodist Plan for 1962 but it was eventually closed. In 1984 the chapel was sold for £2,300. It remains in private ownership but has not had any major conversion or work carried out on it.