You are here: HomenextChapelsnextHampshirenextWherwell, Hampshire 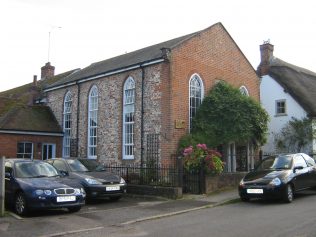 The story of the Wesleyan society at Wherwell is told in “This Temple of His Grace” by Rev. B.R.K. Paintin. Methodism came in about 1816. Meetings were held in two cottages. The first chapel stood at The Chalkpit, Greenwich, and consisted of two cottages, with the lower rooms made into one, part of the upper floor removed and part left to serve as a gallery.

In 1818 the Andover Circuit was formed, and included Wherwell with its 13 members.

From 1816 till 1843 the average membership was 10, but in 1844 it doubled to 20, and increased again, to 30, in 1845. Till 1925 it remained one of the liveliest societies in the Circuit. James Tovey used to speak about the crowded class meetings that met in his house. The meetings were often disturbed by boys from the village, but some of those who came to mock remained to pray and became stalwart Methodists. William Tovey was the leading instrumentalist, and other village musicians made music with him.

The society exercised a wide influence in surrounding villages, and, as Paintin says, “eternity alone will reveal how many souls were brought to Christ.”

The society decided to build a new chapel in 1846, but local land-owners were unlikely to provide a site. When the site was purchased, in the village centre (see photograph), the man who had bought the site, Charles Batt, was offered double the price to wrest it from the Wesleyans, but he held firm. Nonetheless, James Tovey and his family were evicted from their home and had to move to Longparish. Charles Batt, who was the priory blacksmith and a powerful preacher, was dismissed from his work, and had to move away to the New Forest.

In the 1870s there was a local preacher called George Lawrence who, though totally blind, tramped the circuit to take his services, and was always able to take a service without prior notice if a preacher failed to come. He kept time with his finger, from a clock in his pocket. Prayer meetings were usually held after the evening service in his home.