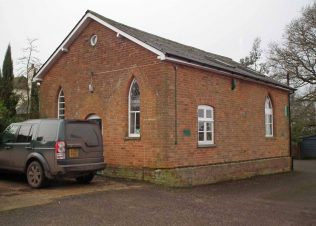 The story of the Wesleyan society in Newbury has been told in Joan Booker’s Thy chartered Freemen. She writes that by 1840 twenty-five Methodist congregations flourished within the Newbury Circuit, and lists a house in Faccombe registered for worship in 1814.

The house of William Piper “situate in the parish of Faccombe” was registered in September 1819. There was (1) a certificate for a newly erected building called a Methodist chapel, 8 June 1821. An 1832 Plan includes Faccombe. Then there is (2) an 1837 list of Wesleyan chapels in Andover Circuit, with first dates of trusts, showing the Faccombe building as a recently erected building used as a chapel for the assembly of Wesleyan Methodists. Thus, this chapel was built in about 1837. Alison Deveson comments (3) : “It looks as if this was the second Wesleyan chapel there, so Wesleyans must have been reasonably well established at one time, but yielded completely to Primitives. It looks later than 1837, but there is no documentary evidence for rebuilding.”

In November 1854 the Newbury Wesleyan Plan included Faccombe, Sunday 2.30; Friday 6.30. But by the time of the Wesleyan Atlas (1871) Faccombe had dropped from the plan.

Primitive Methodist travelling preacher Elizabeth Smith preached in Faccombe in 1830. and it was the first village where a Primitive Methodist society was formed. The Wesleyan chapel still stands, but is the estate office; the Primitive chapel has completely disappeared and no image of it has been discovered.