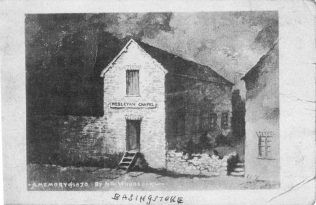 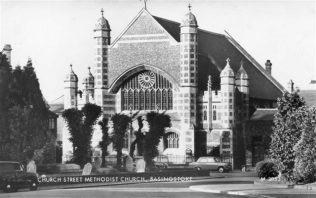 The photographs show the first, second and third Wesleyan chapels in Basingstoke. The second was taken down and rebuilt in Cliddesden, where I took the photo.

According to Bernard R. K. Paintin in Since Wesley came: two centuries of Methodism in Andover (1951) (page 7) writing about the 1820s:

Andover at this period was a centre of evangelistic enterprise. Societies were formed at … Longparish … and as far north as Basingstoke.

The brief, anonymous History of the Church and of the Methodist Society in Basingstoke from 1739 says on page 6 concerning John Wesley’s final visit on 30th October 1763:

it does not seem there was much immediate advance. There is however a record that a group of people met for years in a loft behind the Pear Tree Inn, where until about 1860 relics of the old Methodist meeting still existed.

John Vickers also mentions this location for Wesleyan meeting in his 1986 doctoral thesis:

A society which, following Wesley’s visits to Basingstoke, met in a loft behind the Pear Tree Inn died out.

Neither the History nor Vickers offers any contemporary documentation to verify this, and the report is possibly erroneous. We shall return to this problem later.

So far as I can learn, it is more than half a century since Methodism was first introduced into Basingstoke. There are persons still living who remember some of those earnest pioneers who introduced it.

This implies that any society raised in the age of Wesley died out before the 1820s, and a new start (Startup’s “first introduced”) was made, perhaps in about 1820. The report continues:

The names of Gibbs, Tovey, Withers, and Moses Cook are still green, and are remembered with pleasing interest.

Gibbs is presumably the Stephen Gibbs whom Paintin lists as one of the members at Whitchurch in 1820.

There was a minister called Ebenezer Tovey, stationed in the Andover Circuit rather later (1843-5), whose father had been employed by John Wesley as a master at the Kingswood school. The 1851 Census has a James Tovey, boot- and shoe-maker, signing the return for the Wesleyans of Wherwell, in the Andover Circuit. Paintin, in a history of the Wesleyan society at Wherwell called This Temple of His Grace , reports that James Tovey and his family were evicted from their home in about 1846 because of their Wesleyan membership. His son, also called James Tovey, became a leader of the Society, class leader, and local preacher.

There was a Jason Withers, of Whitchurch (Wesleyan Magazine 1838, pp. 218-9) , a local preacher in the Andover Circuit, who died in 1847 aged 74: he was also a class leader for many years, and is given by Paintin as a leader in the society at Whitchurch in 1820.

This gives pointers to the identity of these men. Startup’s report continues:

For some time the meetings were held in the house of the last-mentioned person [Moses Cook].

The 1841 Census locates Moses Cook, aged in his mid-50s, resident in Winchester Street, Basingstoke. He was a baker. Sadly there is no schedule for him and his family in the 1851 decennial Census, but the national register of births, marriages and deaths informs us that Moses Cook of Basingstoke (there is but one such person) died in the first quarter of 1857.

After a while a more public place was engaged for our work; but from this time the cause began to decline, owing to the difficulty of supplying the pulpit regularly. The assembled congregation would frequently be without a preacher, and then – as a not unnatural result – the preachers would sometimes go, and find almost no congregation.

On one occasion, a good brother preached, it is said, to two persons. His labour, however, was not in vain; for, as he learnt years afterwards, one of the two persons was led by that sermon to seek the Lord. The cause soon died out, and for forty or fifty years Basingstoke remained without Wesleyan services.

This would mean the new start was brief, and would place the cause soon died out in about 1830 at the latest. This in turn would fit in with the Methodist Recorder of 24th March 1904 which states:

Basingstoke was Methodistically the child of Andover. Two or three starts were made, it appears, but finally the “New Mission at Basingstoke” was firmly established.

The 1851 Census records no Wesleyan meeting in Basingstoke.

William Willmer Pocock in A Sketch of the History of Wesleyan-Methodism in some of the southern Counties of England (London, 1885) (pages 75-6) relates that a Mr Mead from Bedfordshire took a farm near to Basingstoke, but found no Methodism. According to the History of the Church and of the Methodist Society in Basingstoke from 1769 – the Golden Jubilee Souvenir handbook published in 1955 – he had been evicted from a farm in Bedfordshire because of his Methodism. Together with a man from Guildford and one or two others in Basingstoke itself, he made a persevering search for premises, but could fix only on an ill-lit granary to which access was by a ladder which obstructed the pathway and had therefore to be drawn up after the congregation assembled.

This first Wesleyan chapel was this old granary in Potters Lane, rented, and opened, according to an old picture of it, in 1870, which accords with G. E. Startup’s “about 18 months ago” published in May 1872.

Basingstoke library holds a brief document published in 1965 which confirms this. It is entitled Church Street Methodist Church, Basingstoke , and tells us that “the Wesleyan society met in a room over an old granary in Potters Lane entered by ladder.”

By then, Basingstoke as a town was rapidly increasing in importance. The Wesleyan church was made head of a circuit in 1872, and Conference sent a home missionary.

The Rev. G. E.Startup’s 1872 report, which was quoted earlier, continues:

the congregations were good, and the people appeared to receive the Word with gladness. A Society-class was formed, and the infant cause appeared to be prosperous and promising, when suddenly death removed the one man on whose activity and influence it seemed mainly to depend… a great and serious loss.

A period of slow decline unhappily now set in. Some who joined the Society at the first began to neglect our services; and after six months of earnest toil and anxious watching, the home missionary felt it to be his duty to leave the apparently unproductive field for one that seemed more promising. When his successor commenced his labours, the aspect of affairs was very discouraging. His first sermon was preached to five adults and as many children. It was announced that the class would meet at the close of the service, but only one person remained; and it was not until a month had elapsed that a Class-meeting could be held at all. From that time, however the work has been steadily growing. Our congregations have gradually increased. Last Sabbath there were about forty at each service.

Arthur Attwood (1916-2002) was born and and grew up in Basingstoke. He became a journalist for the local paper, and was known as a local historian. He wrote books on local history including An illustrated history of Basingstoke , plus numerous historical articles for the local paper, and was made a Freeman of the Borough. In the local Gazette , 15th December, 1978, in an article entitled The struggle for a Methodist ‘meeting’, he supplies a few additional details to this story:

The information is taken from notes left by the first minister, the Rev W. P. Ellis, who was appointed in 1872.

Mr Ellis wrote his reminiscences in 1920, when living in retirement at Wantage and sent them to his old friend, Mr. W. J. Bird, son of Mr. John Bird, founder and first editor of the Basingstoke Gazette…

Mr. Thomas Mead linked up with a Mr James Kingham of Dummer to rent a granary at Potters Lane, which served as a meeting place, with the Andover circuit supplying the preachers.

The Wesleyan Minutes of 1873 (page 128) record that the sixteen members who made up the Basingstoke Society were transferred from the Andover Circuit to the Home Mission department of the Second London District.

Eventually a site for a chapel was acquired, and a purpose-built chapel erected in 1874-5.

It was through the work of this church that I came to faith in Christ in 1963.