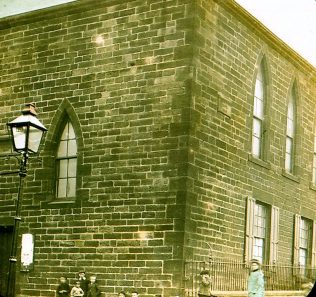 zoom
This view of the Swinburne Terrace WM Chapel, appears on a glass lantern slide produced in 1901
Image from the collections of the Newcastle upon Tyne District Archives 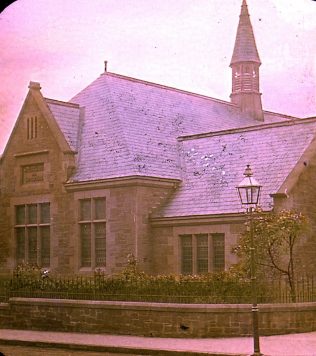 zoom
This image of Station Road WM Bill Quay, is taken from a glass lantern slide of 1901
Image from the collections of the Newcastle upon Tyne District Archives 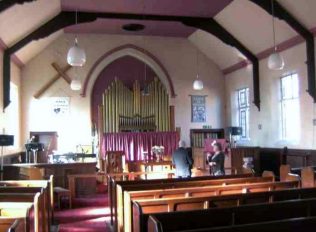 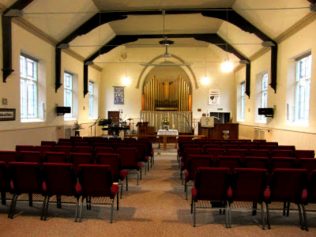 John Coulthard was born in 1777 at West Black Dean in Weardale, Co. Durham and attended both the established church and the meetings of the Wesleyans, with his parents. John Wesley preached in what was to become the Wolsingham Circuit twelve times, the last being on Friday 11 June 1790. Coulthard attended this meeting.  His parents died at a young age and he married young but his wife died shortly after their union. In 1799, he moved to Sunderland and in that year received his first ticket as a member of the Monkwearmouth Society from Mr Bogie thereafter becoming an active worker in the Sunday Schools.

After a few years, he left Sunderland and fixed his residence at Bill Quay. Here he was a partner in the glass works with a Mr Cookson. When he arrived in the village of Bill Quay on the banks of the River Tyne, he found the people in a degraded state with men addicted to horse and boat racing, cock fighting and pitched battles with each other, together with excessive drinking. The women weren’t much better. At the end of their day’s toil, they could be found drunk and disorderly. Coulthard decided that a change for the better was needed for all those he employed in the glass works and ultimately for all the village residents. Amongst the first things he did was to establish a Sunday School at his own expense and which served the children in the village as well as those from Felling Shore and Heworth. He also established a library for adults and encouraged the formation of a Friendly Society for the benefit of his workmen.

Services of the early Methodists meeting in the village were held in cottages, most notably that of a Mrs Elizabeth Barnes in 1814. A preacher – a young soldier – found that the congregation was so vast that he had to preach outside on the incline leading up to the door. The earliest record of this Society is when they are included on a Newcastle Circuit Plan for 1808/09. On this Plan, a preacher was planned every two weeks at 10.00am. Circuit records suggest that the Society was much older having been started before 1800. As the Society grew, the need for bigger premises became necessary and Coulthard allowed the use of the bottle works until 1829.

Coulthard’s interest in the Society led him to give a plot of land adjacent to the bottle works on which to build a chapel but he died before it was completed. His excellent diary shows how he kept in regular contact with the members and with Rev James Everett. He returned to Gateshead from London in the Spring of 1838, died at his home in Bill Quay in the September, and was buried in Heworth Churchyard. His son, Thomas, ensured that his father’s wishes were carried out and the chapel duly opened in 1841 on a former rubbish heap. The chapel was often referred to as “Stinky Green Chapel”.

All proceeded well for the next ten years when there was a split in the membership. The chapel was taken over by the Reformers, the Sunday School closed down and moved to Heworth Shore where a Methodist Society had been established and most services resumed back in the cottages and open air. The Bottle Works were sold to a Mr Richards who was in sympathy with the Wesleyans and restored the chapel back to the orginal congregation.

In 1866, a great revival mission was held in the locality led by Robert Haworth, Joseph Dawson and Peter MacKenzie. Such was their efforts that 150 new members were added to the chapel rolls. Amongst those brought into the life of the church were Robert Wray Smith – later to be a minister in Canada – and his brother Charles. Sadly, this was also the year that the Bottle Works closed and the congregation were about to lose their chapel. Eventually a site was secured at Swinburne Terrace and every night after work, the men-folk set to work on building their new chapel. The eventual cost of the new chapel and schoolroom was £1,300 and was opened in August 1869. In 1882, the whole site was acquired by Wood, Skinner who cleared the site, including the chapel, so that a shipyard could be built.

The building of the Swinburne Terrace chapel was not without its problems. Whilst the chapel members raised all of the necessary funds over the course of a year, the building was almost not to be. On Saturday 24 October 1868 a gale, which affected the whole country, caused part of the building to collapse. The local newspapers reported the effects:

“.. between the south end of the chapel and Mr Brown’s house was a narrow passage leading from the road to the waste ground in the rear. During a strong gale of wind from the north west… the roof of the chapel came down bringing with it nearly the whole of the south gable and a large portion of the north gable, the whole falling with a terrible crash….. The south gable fell bodily upon the adjoining house, a two storey one, crushing in the roof and the floors of the upper rooms, and completely burying the occupants of the ruins.” Four people died and four more were badly injured. It took the villagers more than 4 hours to recover the bodies, the youngest being Alice Brown aged two.

The building of the chapel continued and was eventually opened on 15 August 1869. The building could seat 450 and alongside stood a Wesleyan Elementary School which was leased out to the Heworth School Board until Bill Quay School was opened in 1877.

On 20 January 1890, the Trustees were again looking to build new premises particularly to cover the needs of the ever-growing Sunday School. It was decided to build a Lecture Hall and Schoolroom first and add the chapel when funds allowed. The foundation stones for the £1,500 Station Road buildings were laid on 10 August 1895 and it opened on 12 February 1896.

The old chapel on Swinburne Terrace continued to be used but in 1906, when repairs were found to cost so much, it was decided to close the building and sell it, using he funds to extend Station Road. The last service was held on 10 March 1907 following which the upstairs was converted into a cinema by Victor S Jefferson and a billiard hall downstairs. It closed as a cinema in 1930, became a Civil Defense store then following partial demolition, was used as a static water tank in WWII. The building was finally demolished in 1947.

Following Methodist Union, the premises were altered to accommodate a new rostrum, an additional schoolroom and alterations to the organ and pews as well as general repairs. It was found that there was never going to be a chapel built on the site as originally intended – there was neither the need nor the funds available.

On 4 June 1972, the Society amalgamated with the congregation from Wellfield Terrace (ex PM) chapel in the village to become Bill Quay Methodist Church. In later years, they were joined by the members from Pelaw (ex PM) when that church was closed.

In the new millennium, faced with dwindling numbers and finances, it was thought that the chapel would close for good but, in an undertaking between the Circuit Meeting, the church and a local well-established fellowship group who were looking for premises, a Christian witness has been maintained in the village.